Spice Up Your Night

With barely time to breathe, following a hugely successful five-week tour of the USA, the Pipers are off again touring the concert halls of England in celebration of twenty years being ‘…the most famous bagpipe band on the planet…EVER!’

Now before you turn away at the thought of a couple of hours of bagpipe music, think again!

With nearly 40k social media followers, in today’s terms RHC Pipers are stratospherically popular and, judging by the night’s concert goers, they appeal to everyone across the board.

What is the Pipers’ magic?

You could be forgiven for thinking you should have been at Nottingham’s iconic Rock City when Founding Director Willie Armstrong engages with the audience: ‘Are you ready to rock? Are you ready to Bag Rock!’ With a resounding ‘Yeeesss!’ the familiar skirl of the pipes begins.

From beginning to end, the show is packed with a varied programme, featuring every member of the band at some point, demonstrating immense musicality in every quarter.

The show, in two halves, covers a delicious menu of emotive music as well as some great rock standards. Particularly moving in the first half is when people are invited to wave the torches on their mobiles as the wonderfully powerful Chris Judge serenades the audience with the gorgeous Tom Walker song Leave A Light On: one of those ‘hairs standing up on the back of your neck’ moments!

Its equal, in the second half, is a beautiful traditional tune, Heroes of St. Valery, written in remembrance of the hundreds of soldiers of the 51st Division of the Argyll and Sutherland Highlanders captured after the Dunkirk evacuations in the Second World War.

Predominantly, the show was light, fun, and entertaining with brilliant arrangements of AC/DC’s Thunderstruck fused with Smoke On The Water; Leonard Cohen’s Hallelujah and a bit of Robbie Williams’ Let Me Entertain You to give just a flavour of this rather different rock concert. 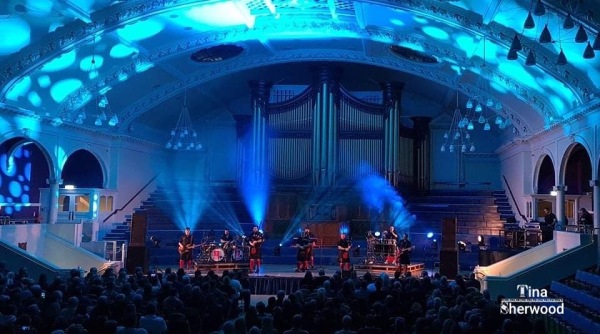 With an encore of It’s A Long Way To The Top (If You Wanna Rock ‘n’ Roll) and Queen’s We Will Rock You, the Red Hot Chilli Pipers left the Nottingham audience cheering, applauding and definitely wanting more following an evening’s top entertainment from a much (unjustified) maligned instrument.

Words and photos by Tina Sherwood at All The Ts Photography