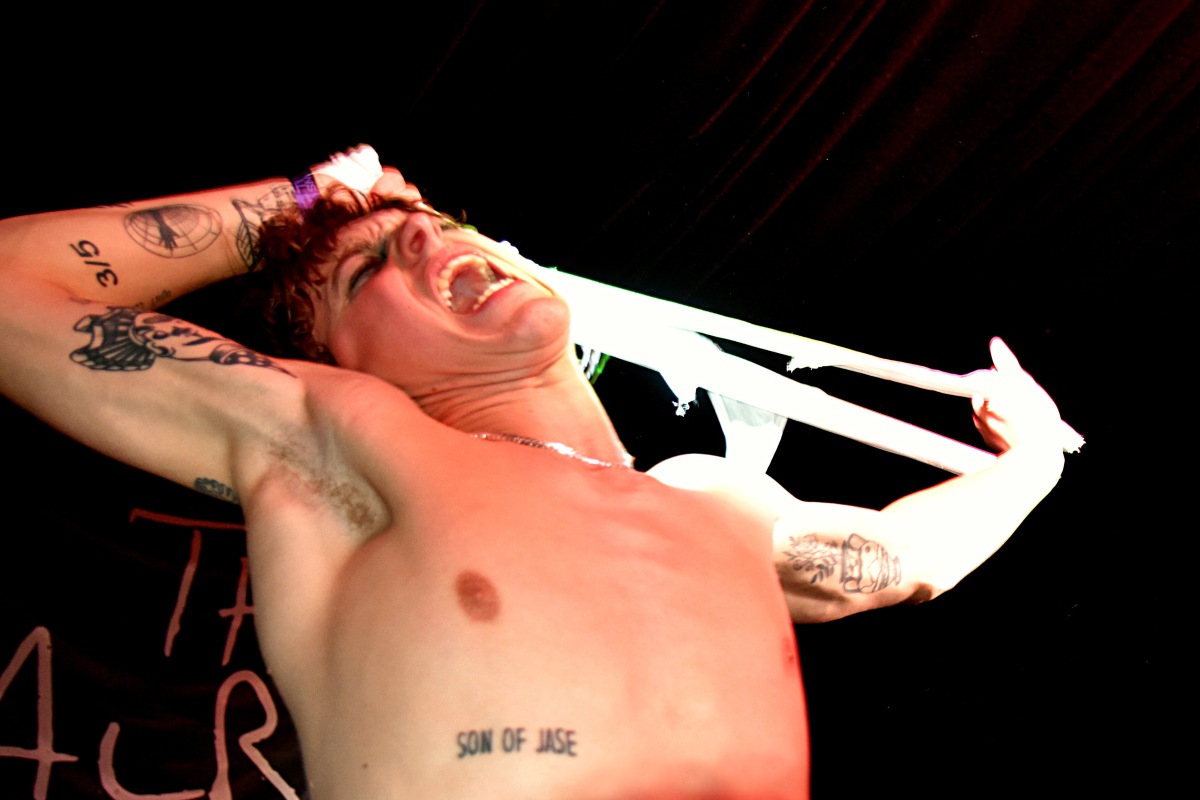 It was good to see Mutations back following last year’s successful post-lockdown event. Word seemed to have spread, as we met lots of people who’d travelled from across the UK to be here.

After an energy-filled start on Thursday, Friday saw a welcome return to Brighton for Pozi at the Latest Music Bar. Some technical issues at the start of the set must have had the band reminiscing about the feedback horrors of the Great Escape, but fair play to the sound team on this occasion for getting things back on track; setting up a violin to be its best must be a challenge after a swathe of guitar bands, but thankfully not an insurmountable challenge on this occasion. It wouldn’t often come across as a compliment to say a band is interesting – Pozi though really are interesting in the best of ways, and always a good booking.

Some consternation from ticket holders that their expectations of being guaranteed entry to the headline acts at Chalk were blighted by long queues outside the venue, which seemingly was already at capacity, resulting in some missing out on the joys of Warmduscher and the eclectic stage presence of Squid. Security is often much maligned but did a great job here in appeasing the crowd and keeping things upbeat.

Happily, this seemed to have been resolved by Saturday, and not even the continuous rain could dampen the mood. After lots of strong rumours about the secret set at Chalk, The Murder Capital came on fashionably late; a general crowd-pleaser seeming pleased themselves to cause a mosh pit so early in the day.

More audience interaction over at The Albert, as Saint Agnes stepped in at the eleventh hour and brought together old fans and new – their tribute to Keth Flint, a pure punk version of Firestarter, putting a smile on everyone’s face. 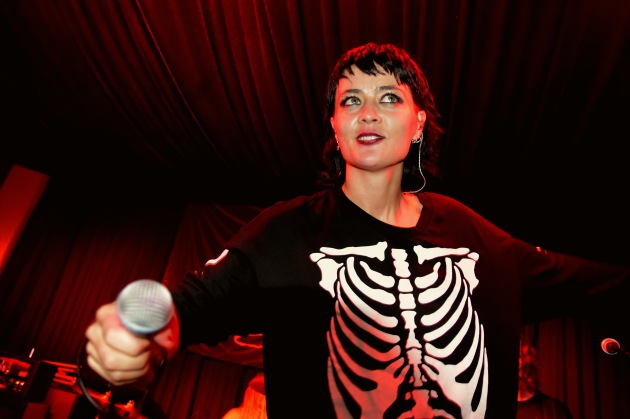 And if those present thought that was a lively performance, they were about to have the stakes upped in dramatic fashion. Priestgate are always going to be in line for the most photographed band award – the fact that they could barely all fit on the stage not causing an issue as vocalist Rob Schofield is barely still for a second, and as happy in the crowd or hanging from the lights as at the front. A delight to watch and shoot, look out for a return date to Brighton in February. 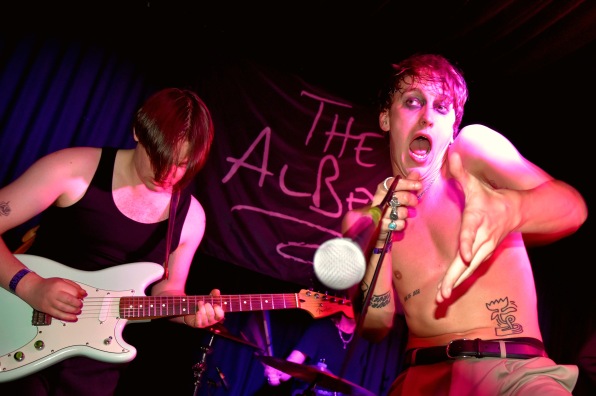 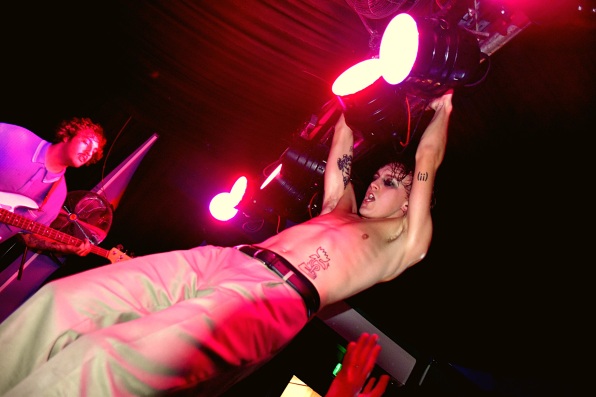 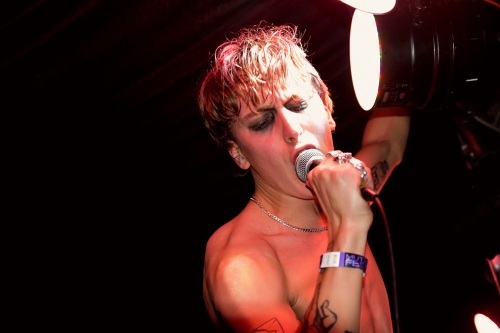 Over at The Hope & Ruin, Spang Sisters brought the pace down with ease and style. With an ever-changing line up and numerous ties to other local bands, they played a beautiful set complete with flute, cello, violin, drums, bass, and some hopping between guitar and keys. It can be easy in all-day events to stick with the most outrageous or frenetic on the bill, but to master laid back orchestration is something special and those present here were onto a winner. Charismatic, refreshing, and a welcome break from ego that delivers more than any facade could.

A quick run down the road to Komedia Studio delivered a very busy room engulfed by the smoke machine. Thankfully, Jessica Winter’s vocals are consistently so sharp and on-point that they cut through the dried ice with ease. Replicating recorded versions of tracks isn’t a gift everyone has, and it’s a measure of talent and confidence that lets an artist carry off a solo performance where nothing is lost in translation – downstairs at the theatre felt like stepping into something separate from the rest of the festival, a happy parallel world in a darkened basement.

Sticking around at Komedia, finally a chance to see Hamish Hawk live – and it didn’t disappoint. Hawk falls comfortably into that cluster of Scottish vocalists who have a certain euphonious quality of tone that captivates and charms (preceded by Mackenzie, Collins, Kapranos et al). Another act returning to Brighton in the new year, and one not to be missed. 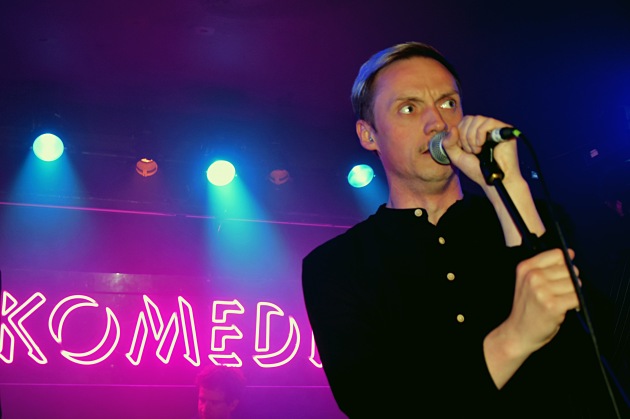 And then the inevitable choice between headliners and more intimate surroundings resulted in a dip into both. Shame brought a big crowd at Chalk, choosing a wall of sound over clarity, and won the crowd over with lots of early favourites mixed with teasers from next year’s album release.

While back at The Hope & Ruin, Fräulein showcased their grunge-tinted talents, giving a great performance and engaging the room from start to finish. The two-piece have an obvious musical connection which only seems to get stronger over time. A perfect way to end the evening.

With more to follow for those attending on Sunday from Scalping and Bob Vylan amongst others, Mutations managed once again to put together an impressive list of artists to fill the venues of Brighton, leaving the train strikes and the weather a distant memory. See you next year!