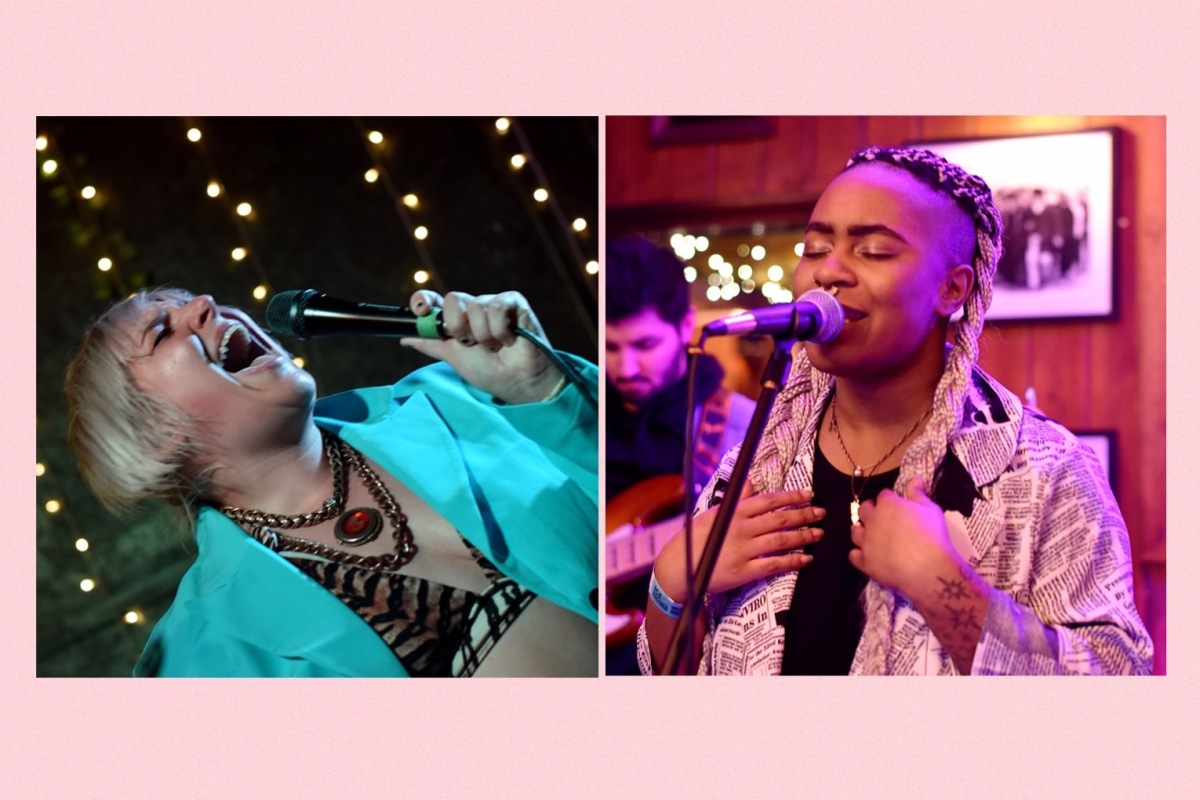 It’s hardly news that most of the big festival line-ups consist largely of the same white men who’ve been on the same line-ups for the past 10 years or more. However, the last week has seen this amplified in a way that even those preferring to ignore the fact would have been hard pressed to miss. It’s not even apologetic in its approach, described in The Guardian by Maxie Gedge, UK project manager of Keychange, (the PRS Foundation’s initiative encouraging music festivals to pledge to commit to line-ups featuring 50% women and gender minorities by 2022) as “a statement of exclusion”. And yet, those tired old responses keep churning out, as a quick glance through Twitter attests.

‘I just don’t see gender on stage’
‘Gender doesn’t come into it for me. I like what I like’
‘It’s about making money, if they drew they’d be on the lineup’
‘They probably just booked who was available /who they liked, wouldn’t read anymore into it’
‘Name me a female singer who could headline a major festival’

OK, let’s take that last one first. There seems to be an idea that if you can’t provide a headliner then what’s the point? But no-one goes straight to headliner status, everyone has to build up to that and often, that’s where the huge gaps are. A case in point, Dials Festival puts on an event in Portsmouth with a great diversity split and all the stages are busy all day long. So there I am at Dials in 2018, it’s early in the day and I pop in to see a band called LibraLibra, no idea who they are or what they sound like but I’m at the venue next door so figure I might as well give it a go. What happens next is that their music and performance blow me away and I unwittingly stumble on a new favourite band. I include them in my review, I make a note to try and see them again and I recommend them to friends. Clearly, I’m not the only one as the following year they’re back at Dials, much higher up the line-up. A few months later they play at Icebreaker Festival, another local event with an inclusive billing, and this time they’re on the main stage at The Wedgewood Rooms. Last October, when there was a tiny window where socially distanced gigs could happen, I saw them headline Brighton Dome. You see how this works, it’s not rocket science. You wouldn’t put off having driving lessons because you couldn’t take your test on the first one, you shouldn’t avoid having a gender mix on your line-up because you may not have a headliner yet. 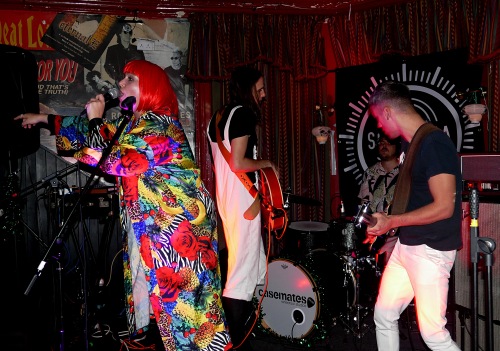 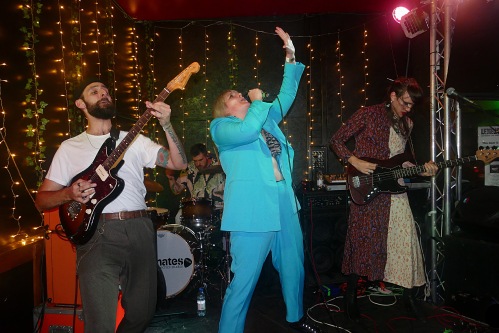 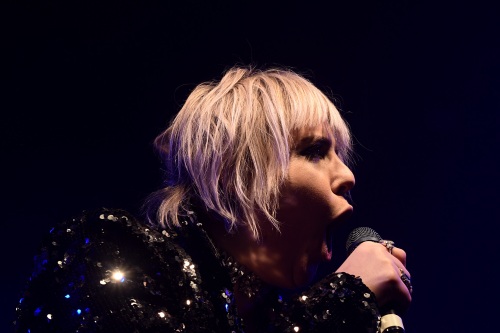 LibraLibra from the top at Dials 18, Dials 19, Icebreaker 20

Back at Icebreaker, someone I know mentions that they’re off down the road to see The Isle of CC. Again, I don’t know their music but I trust this person’s judgement so tag along. And again, am so glad I did as the soulful, immersive tunes and vocals leave me with a warm glow and remind me to move outside my obvious genre choices more often. Aside from making recommendations here, my point is that because those bookers bothered to vary the dynamic, they created better festivals for everyone with no debate about the talent on offer. 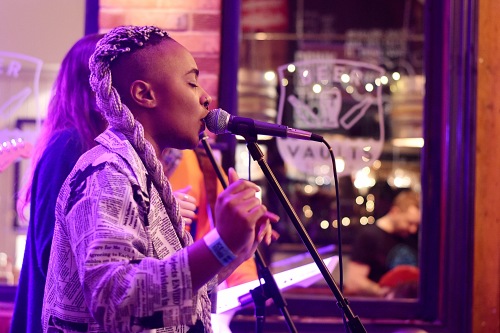 The Isle of CC, Icebreaker 20

But where are these women who could draw a crowd for the top spot? Well, tour ticket sales suggest that people will pay good money to see Kate Bush, PJ Harvey, Skunk Anansie, Nadine Shah and Paloma Faith to name a few. What’s that, some of those are hardly contemporary? May I present this year’s players… Duran Duran, Stereophonics, Snow Patrol, Liam Gallagher and yes, even Catfish and the bloody Bottlemen. Need to fill some spaces elsewhere on the bill? How about you let The Kooks and Scouting For Girls have a day off and call up Dry Cleaning, The Nova Twins, The Orielles, Grace Petrie and Celeste? (Am sticking with UK artists here as the decision as to whether international travel can happen any time soon is still, ironically, up in the air. If you add in overseas acts there’s loads more big names to mention).

As much as I don’t want to take away from the gender issue, it’s really important to also acknowledge the imbalance in other areas too. Where’s the POC representation, the LGBTQ+ acts, the disabled artists? If we’re fighting for equality let’s not lose sight of the wider picture. I love this clip of Bowie being interviewed on MTV back in the 80s and using the moment to raise the question of racial diversity on the station in the most beautifully eloquent way, a fine example of how we can all use our situation to influence change, even if it’s about something that doesn’t hold us back personally. You may well have seen it doing the rounds a while ago, it’s worth another watch.

In a world where you can be the interviewer, blaming the lack of diversity on others and convincing yourself it’s not your problem, or you can be David Bowie, seeing the reality of what goes on outside your privileged bubble and challenging the status quo… be more Bowie.

And who knows, if the big festival bookers took a positive lead on this and made some changes, maybe the doubters would see gender on stage – in all its glory being amazing and brilliant. Maybe they would still like what they like and it would include some brilliant new black artists they’d never had the good fortune to hear before. Maybe, as the artists became better known, they would draw more ticket sales and maybe festivals could book who’s available and on their wish list and it might reflect more than just white men whose 10 year old indie haircuts and parkas are starting to look just a little bit dated now. So yes, of course you should book musicians based on their talent, just please take your blinkers off first and see the vast range of talent that’s out there to choose from. We can all do better. We can all make it better.

We had a lovely chat to purveyor of infectious, quirky electro-pop, Tom John Hall. Join us to find out more about his latest album, fundraising during lockdown with arts collective Year of Glad & the hidden treasures of Derby - link in bio.
Loads of great new music recommendations this week from:
Photographers - show us your high street!
‘It’s an emotional listen, like peeking at the pages of someone’s diary’ - Ryan Bell reviews For Those I Love, a tough journey through friendship & grief, but a stunning album nonetheless - link in bio.
Hey, hey, our April cover is up now & we’re looking for new music writers & photo submissions, link in bio.
Photographers! Our next online gallery is open for submissions now until 9th April. The theme is the high street. What’s your favourite shop? Do you have images of busier times or the impact of lockdown? More info below if you’d like to join in.
After the disappointment of last week’s festival announcements, I wrote about the inclusion imbalance across minority groups.
Some big old new music recommendations for you this week from Holiday Ghosts, Paul Jacobs, Barnaby Keen & Hooveriii - enjoy & have a great weekend! All tracks on the website now, link in bio.
As The Underground Youth return with sublime new album ‘The Falling’, we chat to Craig Dyer about what keeps the band moving in new directions, their partnership with Fuzz Club Records & life in Berlin - on the website now, link in bio.