“Stand by me my apprentice; be brave, clenched fists”

The concluding lines of Turn the Page, the opening track of Original Pirate Material, Mike Skinner’s game-changing debut album under the moniker The Streets, which turned eighteen this past March. 2020 sees his prophecy fulfilled, as None of Us are Getting Out of This Life Alive sees him recruit some of UK music’s most exciting acts to collaborate on what is the first record by The Streets in nearly a decade.

It’s difficult to differentiate what constitutes as ‘The Streets’ and a project by ‘Mike Skinner’ in the years since he retired the moniker in 2011; I’d imagine Skinner isn’t exactly sure where the line is himself, and this new mixtape provides no clear answers. On the face of it, it doesn’t scream an album by The Streets; whilst the infamous clipper lighter logo adorns the cover, the kitchen-sink imagery of lonely bus stops or Goliath tower blocks that they bordered don’t feature, instead it sits entangled by a brazen gold chain, a trophy to recognise Skinner’s impact on UK music, and a tease into the young heirs who he’s brought along as proof being in the pudding. However, as a collaborative project it possesses a palpable creative spirit and fun energy but also a sloppiness (the latter of which could not be said of Original Pirate Material or A Grand Don’t Come for Free) and surprisingly the most jarring part of the mixtape is often Skinner himself.

His idiosyncratic style, only a step away from spoken word but with a documentarian eye for detail that captured early 2000’s youth culture so definitively, here stands out often as clumsy and wonky when placed alongside some of the slicker features. If this were your introduction to The Streets it would be hard not to think that Skinner is failing to keep up with the kids, at times the difference in tone and rhythm borders on embarrassing. It doesn’t help that it’s stylistically all over the place and inconsistent in production too, for example the titular track with Bristol punks IDLES should have been a towering, punishing success but disappointingly sounds tepid and brittle. On the other hand, the wobbly dubstep of Eskimo Ice with Kasien is the polar opposite; hard, loud and face-scrunch inducing. 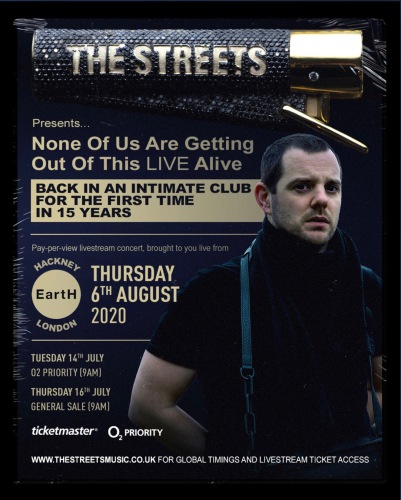 As for the features, it’s where the mixtape shines for the most part and Skinner should be given credit for finding space and allowing for their personalities to flourish, even if it works against him personally in a number of cases, though one is left wondering for what reason the highly anticipated Slowthai duet did not make the cut, with him being often labelled as the true heir to Skinner’s crown. Initial listens are a little harsh, but after a few playbacks it would be hard to argue that Skinner has nothing left to offer UK music in 2020, especially when sparring one-liners with Ms Banks on You Can’t Afford Me – “She talks about her ex so much even I miss him” / “I ain’t gonna allow you mate, not even a little, I’m from M&S babes, you got a better chance at Lidl’s” or when weaving around a meditative Everything is Borrowed style beat on Falling Down with Hak Bakar.

Skinner is at his best when crafting a narrative, it’s when his conversational style is at its most charming and effective and this formula here doesn’t allow for such, but if there’s a running theme at all it would be technology; specifically phones. Not the first time Skinner has mused on mobiles, they appear throughout his past work and interestingly can be used to date the projects; the early 2000’s struggle of standing by the door of a club to get signal on Blinded by The Lights or developing a nervous apathy for the introduction of camera phones in the mid-2000s for the fear of being caught in some toilet cubicle hedonism in When You Wasn’t Famous. The same can be said here, his unique view on the 21st century appendage is viewed through a focused 2020 lens and results in the most interesting lyrical moments, as in his references to ghosting and watching Instagram stories Skinner is delightfully honest; like many of us, his phone is always in his hand, though as he says outright, if you think he’s ignoring you, he is.

So, in the end NOUAGOOTLA only muddies the waters further of what The Streets exactly are in 2020; a return to music in the form of a mixtape of rap duets in which the features often outshine the lead should, on paper, be a disaster. But much like the chain on the cover, it’s different than before but there is gold that can be found gleaming through, after the first few awkward listens.

None of Us are Getting Out of This Life Alive is out now on Island Records; more details and link to buy tickets to a livestream performance from London on 6th August here – watch the album sampler below.