Over the last few years the post-punk renaissance (should it surely not be post/post/post-punk by now?) has seen the emergence of many bands armed with strong basslines and shouty vocals, some creating some of the decade’s most vital noise, some unfortunately sounding resoundingly more derivative and pedestrian. The latter cannot be said of New York outfit Bambara who, whilst existing in this new post-punk arena, incorporate elements of noise rock and ambient music, resulting in something darker and more electrifying than many other postx3-punk groups.

Their UK tour stopped off for a show at Hyde Park Book Club, an independent café and arts space in the student area of (you guessed it) Hyde Park, Leeds, where local group Polevaulter provided support. Whilst Polevaulter got the crowd warmed up and moving, some of their potential was sadly dampened by the high levels of bass and vocal echo which resulted in them sounding a little muddy, and any atmosphere attempted by the singer who draped the microphone lead around his neck, was lost by him singing almost exclusively away from the audience, often eyes closed or looking off towards side-stage.

As a crowd made up of 70% black leather filled up the basement space where the dimmed lights shadowed the exposed cracks in the ceiling, a bottle of tequila was placed at the front of the stage; Bambara were now preparing to perform.

I use the word perform, not in a derogatory sense in that anything about them is false but, that in Reid Bateh, Bambara has a frontman with presence, his lyrics read like southern gothic literature and he delivers them with such brutal conviction and energy. Probing and swinging the mic stand like a baton, he is often perched on the edge of the stage or writhing on the floor, resembling a young Glen Danzig all in black, handsomely dishevelled, as though it’s unclear whether he just got up, or hasn’t been to bed at all. 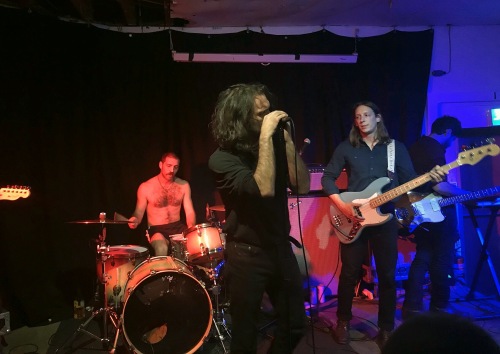 On stage the group are a force of nature, the songs which are mostly taken from their 2018 record Shadow on Everything sound like an impending thunderstorm ready to crack down at any moment. Drummer Blaze Bateh, who is shirtless and relentless, pummels the kit throughout the evening against the battling guitars which colour tracks Jose Tries to Leave and Doe- Eyed Girl with wailing tremors and squeals, like something from a demented spaghetti western film soundtrack.

Set closer Monument was the final moment of anarchic catharsis, the array of black leather coats now too warm to wear adorned the front monitors, as more and more bodies began to pile together, limbs flailing in every direction, often stretching out towards Reid’s preaching frame. As the song began to reach its climax, my head crashed against his, locked in yelping unison of the refrain “I wanna see your Shadow on Everything, Shadow on Everything, SHADOW ON EVERYTHING”.

If IDLES, Savages or The Fat White Family are your bag then chances are you may very well have already heard of Bambara. If not, then I cannot recommend them enough, with this set featuring new tracks such as the blistering Serafina from their forthcoming album Stray (due for release in February 2020) it looks likely that Bambara will only continue to assert themselves as one of the more dynamic rock acts of the moment.

You can watch the lyric video for Serafina below

Keep up to speed with Bambara here