Fast making a name for herself as a respected songwriter and performer, Olympia – aka Olivia Bartley – is back on the road touring worldwide with her new album Flamingo. I caught up with her before her show at Patterns in Brighton and, as well as chatting about the London congestion charge and the lure of the fairground rides on the pier, we talked about her love of music, playing live and creating something new… 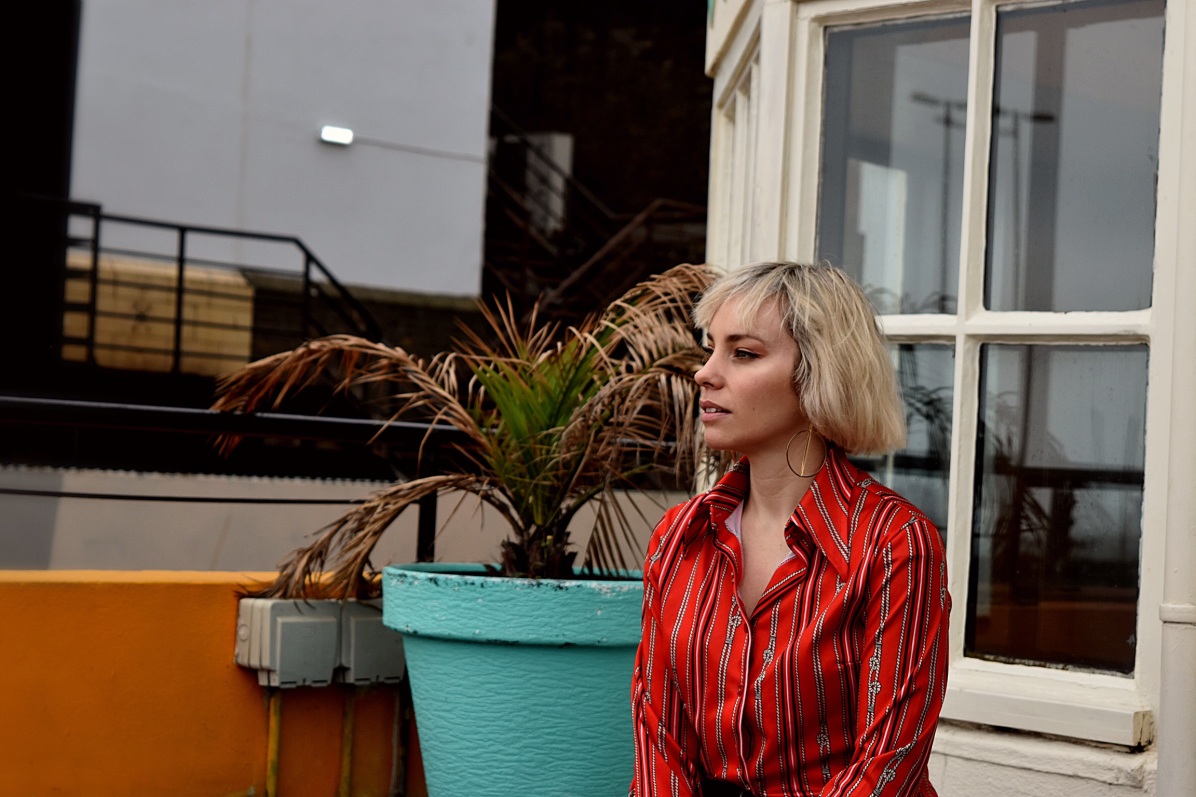 How did it all start for you and what keeps you going in the music business?

I loved playing music, I used to download Joni Mitchell tabs off the internet and I would just play. I didn’t know guitar, I’m self-taught and I would just experiment. It was like an itch trying to play what I thought I could hear and that led me here. Now I know a little bit more and it’s like the more you know the less discovery there is so I think what drives me is I’m curious about everything, I still have that sense of discovery, like what if I try this and this and this…

So what happened was I was playing in Melbourne and a musician found one of my songs, she was quite popular and she just went on social media and said ‘what do you all think?’ and it sort of started an avalanche and here I am. What keeps me going is that I can only do it when I’m excited. I’m not in it for the money or the women!

Is social media generally a good or bad thing for you, it sounds like it helped you get started?

I do have periods when I’ll just turn all the apps off my phone. It can be great or a necessary evil but I think that you’ve got to look after your mental health so if you’re not feeling great you shouldn’t feel you have to look at it. 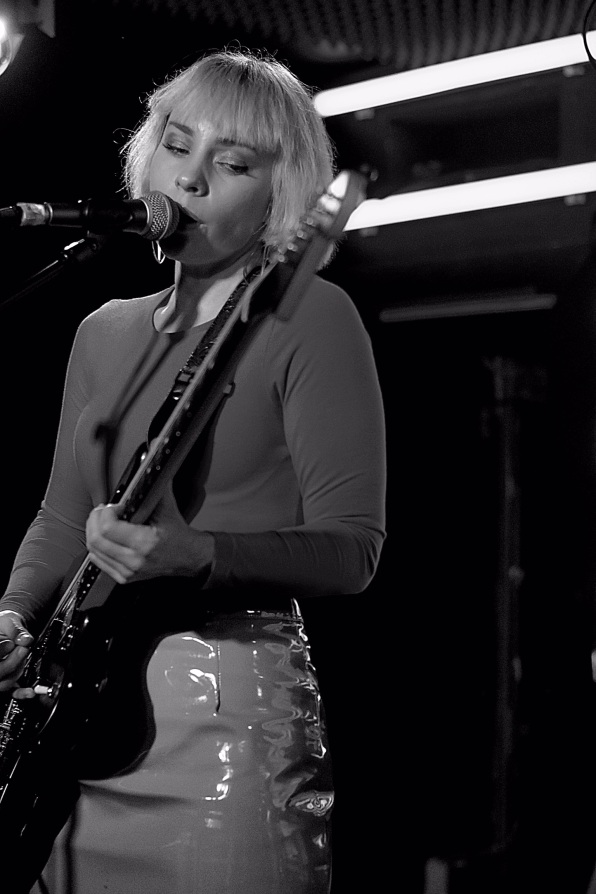 You’ve been out a lot already on tour this year and you’ve got more dates coming up. How do you deal with that, what are the highs and lows?

The good thing is you work so hard every day towards making it happen and those hours on stage are the most important and the most joyful, you do all of it just for that – to be playing every day, because in Australia the population’s smaller so you don’t get to play every night like you would here. It’s so great to be playing every day and I feel my fingers getting harder and my skills getting better. I do feel tired but I feel that it’s a privilege.

When you toured with Julia Jacklin you definitely picked up lots of new fans in the UK. How did that come about, did you know each other already?

I hadn’t met her before, we have mutual friends and they kept saying ‘you’ll love each other’ and she’s great. It felt like Julia was really generous in spirit and it was so wonderful of her to take me on tour with her.

You’ve been to Brighton before – do you get to see much of the places you play while you’re there?

I’m lucky because I’ve been to Brighton a few times, it started with The Great Escape. Brighton’s very like Melbourne and I always feel instantly at ease here. Tomorrow we head to Paris then Amsterdam, Berlin, then Reeperbahn Festival before we do an Australian tour. 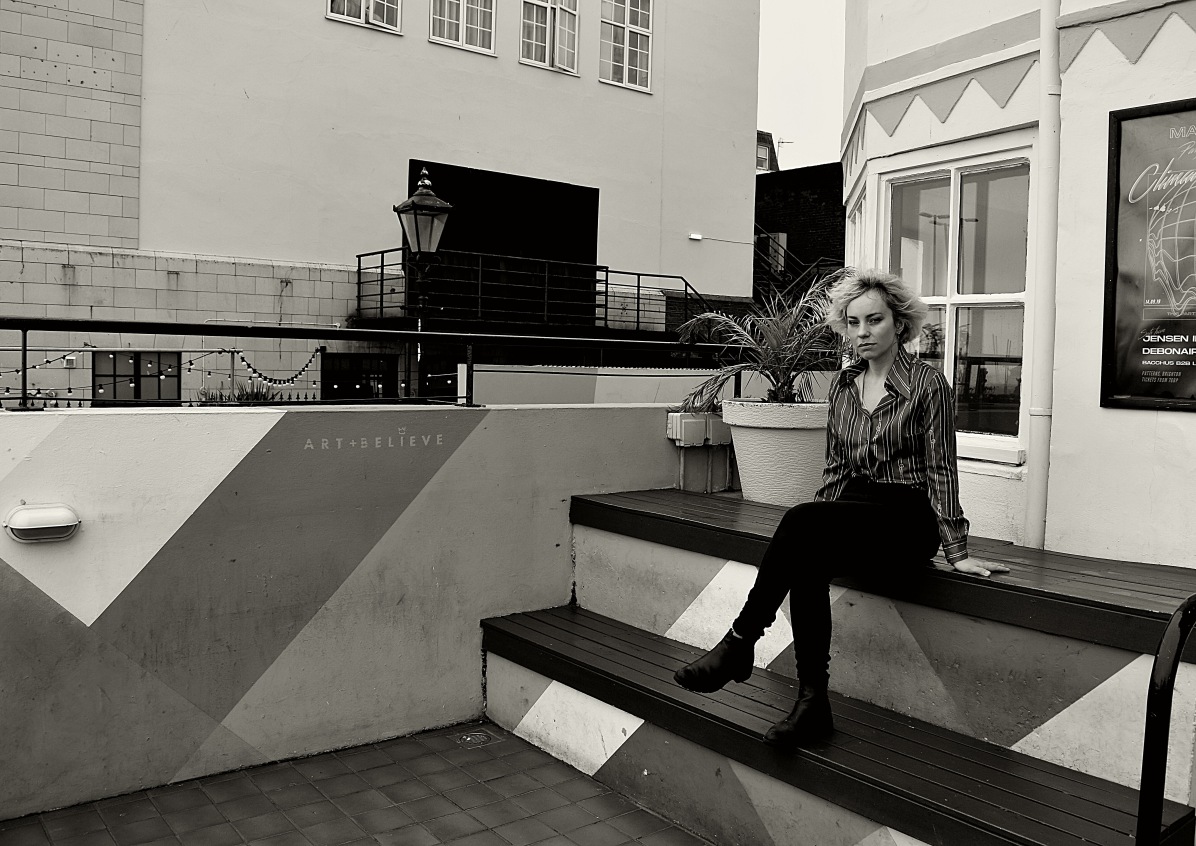 How different are the crowds at festivals from gigs?

It’s so different. It’s great to have an audience who probably would never have heard you before, it’s so varied, what I love about festivals is summer and the openness, especially where there’s one stage where people come and sit and they’re often just music lovers open to new things.

When you’re writing is it always from experience or drawn from things you see?

There’s a great quote ‘Writing is the hardest thing I’ve ever done, the only reason I do it is because I’ve done it before and I know that I’ve done it’. My writing is things I’ve collected from the world, usually a metaphor or visual metaphor… I saw this picture of red honey from Utah, so what had happened was this beekeeper thought ‘I’ll just save money and feed my bees sugar’ and he got candy canes because bees love sugar and it ruined the honey and every bee in Utah. We have such an effect on each other as people that you sort of shape each other, if you’re with someone long enough you can become a bit of each other and I thought about that and it became the song Honey but it’s more about humans than bees.

Lastly, you recently did an industry workshop giving advice to new and emerging artists – is there a definitive piece of advice?

I loved doing it, I have a lot of young artists contact me and my main thing is ‘Get ready to work’. We’re all different but I can just say for me I need to write 9-5, don’t wait for inspiration, it’s not a burden, if you feel good or feel bad just write through it because it’s not just your craft, it’s also getting better at the skills of writing… read books that no-one’s reading, listen to bands no-one’s talking about…

Great advice and if you haven’t heard Olympia yet, definitely take on board the bit about listening to new things. The gig later that night was one of the most enjoyable I’ve been to in a while… 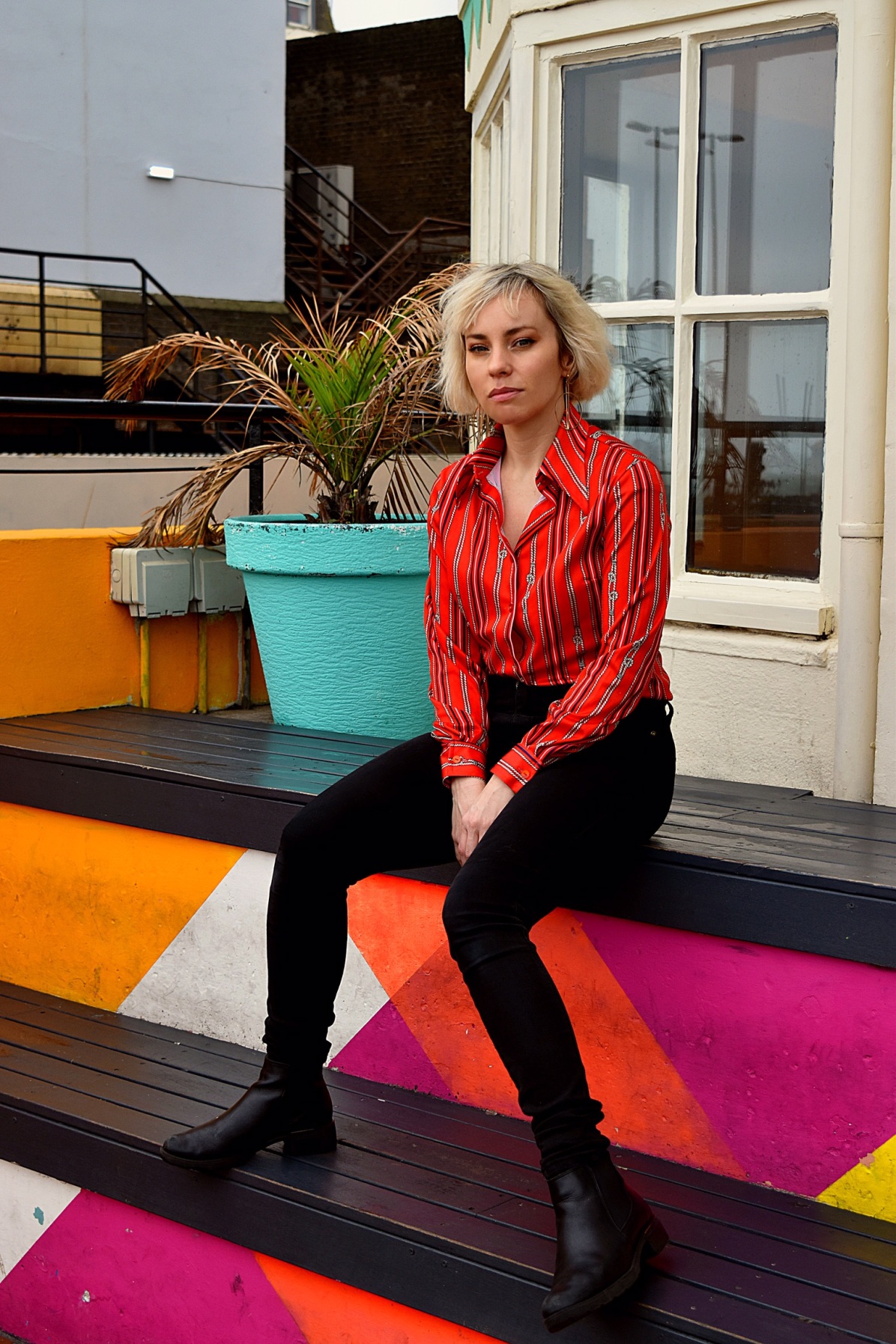 Opening up the evening, newly local Ciaran Lavery proved that one man and his guitar is all that’s needed to hold the attention of the crowd. With a cluster of beautifully written songs and chats about his childhood, the set felt like an intimate gathering of friends, and kudos must go to the listeners for just listening and not providing the usual humdrum of background conversation that infects so many gigs, particularly support slots. With a feel of Leonard Cohen in a seaside town, Ciaran will be one to look out for on the Brighton circuit. 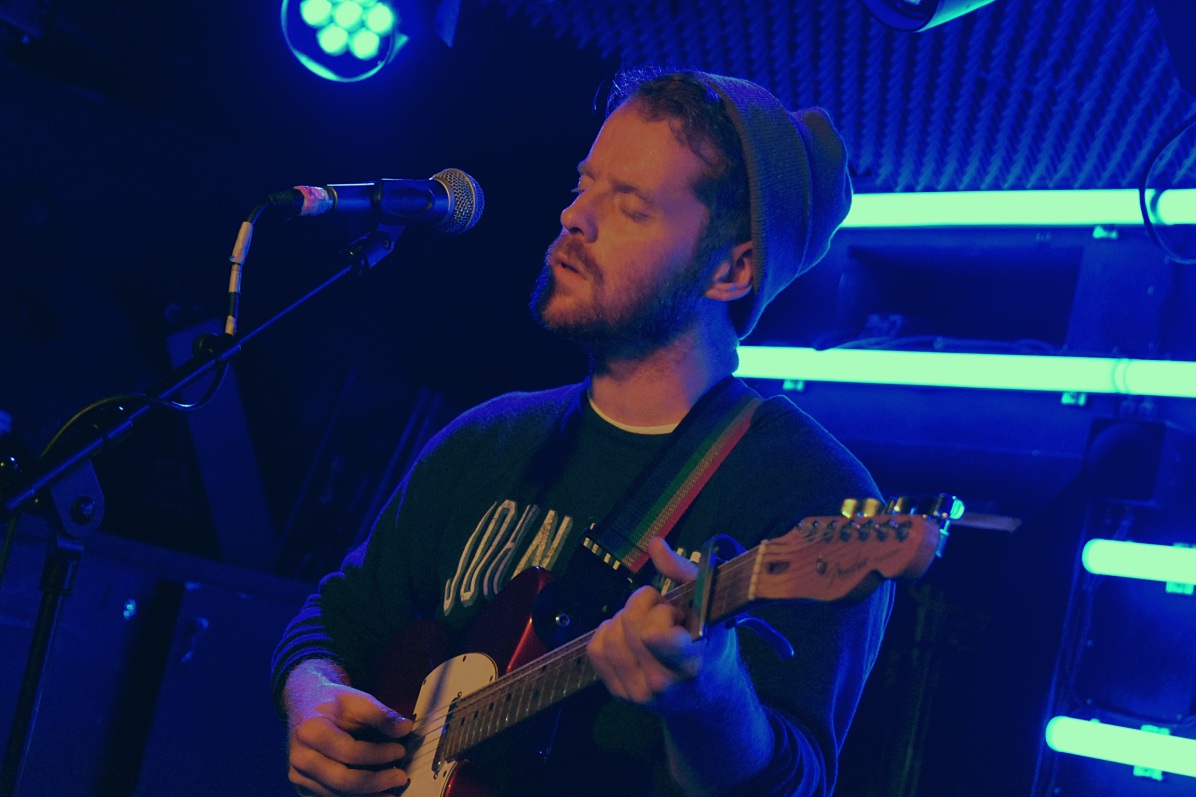 Heading straight into a set filled with hypnotic psych pop tunes, Olympia drew the audience deeper into an already happy and relaxed atmosphere. Mixing tracks old and new, her hints to the nostalgia of music past are clear to hear but take on a new twist that brings things bang up to date. With inter-song tales of sharks in the bath and intriguing all hours visits received by a neighbour, the ambient mood continued as the band worked their way between two different setlists for added surprise (to them as much as us), an end of set cover of Rock n Roll Suicide an added bonus.

The songs on Flamingo get better with each listen. From the New York new wave feel of Star City to the quieter tones of Nervous Riders and a personal favourite in Shoot to Forget (think Yeah Yeah Yeahs fused with Alvvays), the album is a grower and a welcome addition to any record collection. The Australian scene has thrown out some really cool and competent musicians over the past few years with the aforementioned Julia Jacklin, Nice Biscuit and King Gizzard (not forgetting their Lizard Wizard) to name but a few – undoubtedly Olympia has joined the list of artists ensuring that it remains very firmly highlighted on the map of new music you should ignore at your peril. 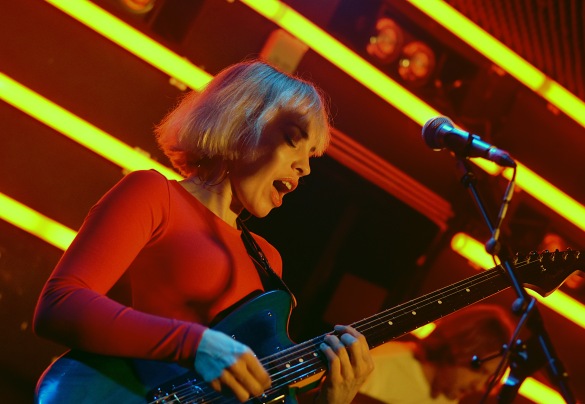 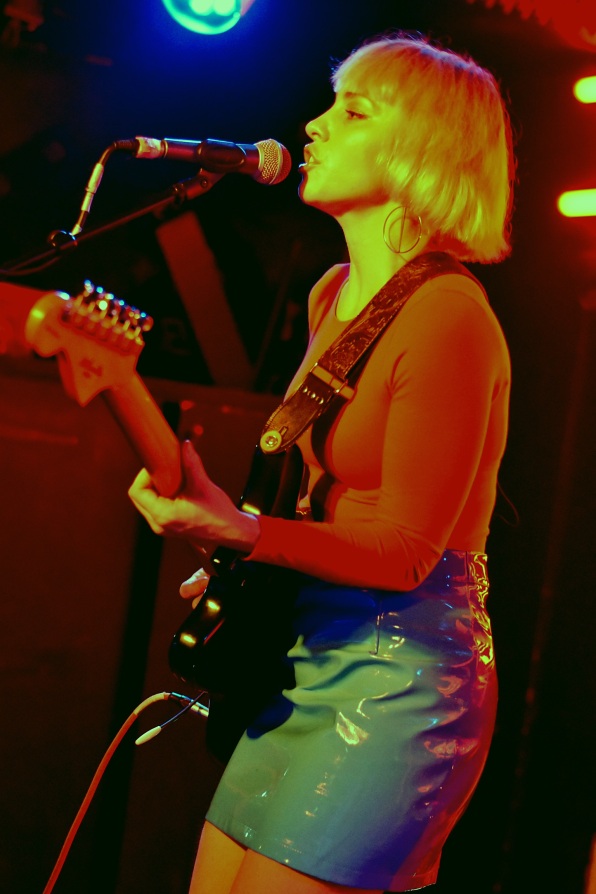 Words, interview and photos by Siobhan