From behind the drum kit to behind the camera, photographer Mik Connor tells us how he made the switch and takes us through some of his favourite photos…

‘I’d just like to start off by stating I’m really not good at talking about myself or things that I’ve done so if I start waffling about nothing, please forgive me.

My name’s Mik, a music and portrait photographer based in Preston, Lancashire. Originally I was a drummer in a touring and recording self styled shitty pop punk band. We didn’t do too badly for ourselves (a few tours, a couple of festival appearances, radio and TV airplay) but we never hit the big time and as these things so often do, it came to an unfortunate end. I tried starting another band after that but it just wasn’t the same and I found myself struggling to have fun with the whole thing again so I decided it was time to walk away completely. Always felt that if you don’t enjoy doing something then there’s not much point in doing it.

When I’d stepped away from making music I knew I had to find another way of staying creative but I couldn’t draw a stick figure to save my life, I haven’t got the attention span to be able to sit down and write a book, I can make words rhyme but I couldn’t write poetry and it was at this point I remembered just how much I used to enjoy taking pictures on old family holidays.

I was always in control of the camera whenever me and my family went away somewhere. My Mum had a habit of cropping out people’s heads or having her finger across the lens, my Dad was always in charge of the video camera and providing his commentary of everything that was going on, so our little point and shoot or the old Kodak disposable was always handed down to me. I don’t know if it was because I made better pictures or it was just a way of keeping me quiet or entertained, either way, it worked.

While I was sat contemplating all of this a post from a friend popped up on Facebook offering her Mum’s camera for sale, without a second thought I messaged her saying I’d have it and later that evening I was round at hers to pick it up. I’d bought my first DSLR at 25 without a clue how to use it. In hindsight I probably should’ve thought it through a bit longer but too late for that now I suppose.

Anyway, a few years on from that now and here we are. I’ve had enough of talking about myself so now I’m just going to talk you through some of my favourite shots instead. I hope you like them and the stories around them as much as I’ve enjoyed taking (most of*) them.’

This is from one of the first ‘proper’ gigs I ever shot in an official capacity with the relevant press pass, up until this point I’d just been shooting small pub/club gigs or sneaking a camera into slightly bigger gigs.

Being a fellow drummer this set up amazed me; all drums, no cymbals and a hell of a lot of sweat.

Such a great band to watch. There’s only two of them but they sound HUGE, highly recommended.

Speaking of firsts, this was the first time I shot a ‘proper’ band and I probably couldn’t have picked a bigger one. This was one of those times I snuck my camera into the show and shot from the crowd. Don’t ask me how I got my 5DMKII with 70-200mm lens attached into the arena, I’ve still no idea how I actually managed it myself but I did and that’s all that matters.

Portrait of my Mum

Now then, here’s a piece of advice. If someone you know is going on a 4×4 driving experience and asks you if you want to tag along to sit in the back and take photos as they go round, just say no. Also, don’t shoot a club night till 3am, make a hour and a half drive to a hotel for two hours sleep and get a McDonalds breakfast all before sitting in the back of a 4×4 taking photos.

I can’t remember the last time I felt so ill.

*this was the one I didn’t really enjoy taking, I just wanted to go lie down in the fetal position until my stomach stopped spinning but nooooo, I had to get my Mum’s good side.

This is another first, I’m starting to see a trend here. This was the first promo shoot I did with a band. Joe, the front man of Save Me, used to do about 99.9% of my old band’s photos so I thought it was only fair I returned the favour.

Handy tip though; if you’re shooting in the woods late at night when it’s dark, always make sure you know where you’re going just in case you take a step backwards to reframe a shot and accidentally end up with a tree branch where you shouldn’t.

My good friend Alistair McGeorge. Part time singer songwriter, part time journalist. Known Alistair for years from him drinking in a pub I used to work in and while he was studying journalism he used to give the band some really great reviews back in the day so again, when I picked up the camera, I thought I’d offer something in return by giving him some promo photos. This was taken in my little studio space back at the beginning of 2018.

Loved this shot as soon as I got it. When I shot Wheatus I was shooting for the venue and was given access to the sides of the stage after the traditional first three songs in the pit. Due to the way the band have their stage set up with the drummer at the front off to one side instead of banished to the rear of the stage, I managed to catch this great angle.

They’re also the first band I’ve seen go on stage without a set list and just ask those in attendance for requests. 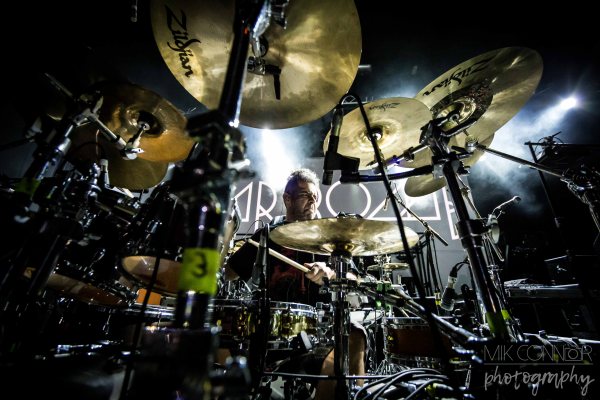 OK, so I wander into the photo pit for the first band of the night. “Drum kit is pushed right to the front of the stage, I’m shooting ultra wide with a 15mm lens, it’d be a crime to waste this opportunity as a fellow drummer; I’m getting some killer shots of this incredible kit.” That was my thought process until the relentless strobes started going off paired with harsh backlighting, managed to catch this through the mayhem though, loved it since. It’s been my desktop wallpaper for nearly 2 years now. 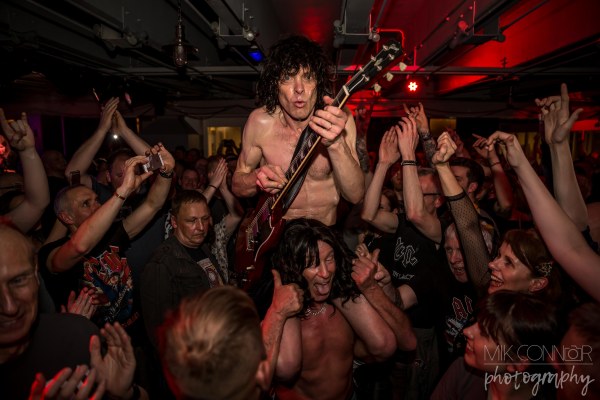 Again I was shooting for the venue at this show (Guild Hall in Preston by the way, three great rooms in one venue) so I was just chilling at the side of the stage when the guitarist decides he’s going to climb on the shoulders of the lead singer and head off into the crowd for a change of scenery. I quickly ran to my camera bag, grabbed the flash gun I always carry in case of emergencies such as this one and decided to follow them into the baying sweaty masses. I like to think being covered in other people’s sweat and the odd bit of people’s pints was worth it for this shot.

Love this shot purely because it brought me out of a massive funk.

I hadn’t been shooting much and whatever I had shot I’d hated, I think everyone goes through something similar every now and again, then I got to shoot these guys. Guy McKnight is one hell of a front man with great energy and presence. I caught this just before I had to get out of the pit and I’m still so glad I did.

Another band you should most definitely check out if you get the chance.

Another old friend of mine, Mr Pete Searle. Pete got in contact with me at the back end of the summer 2018 and asked if I fancied taking some photos for his new music project as well as some for his own personal use (when a snapchat selfie just isn’t a good enough profile picture) so I said of course. Now I don’t know if this was a brave or stupid move on Pete’s part but he also told me I could have full creative control over the shots. He offered no direction other then he wanted some suited up and some casual. Quite proud of how they came out. Pete’s still speaking to me so he must’ve been happy too I guess. 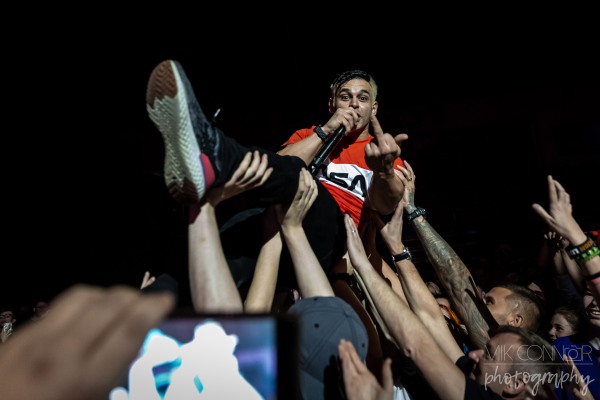 Easily the most energy filled set I’ve had the pleasure of shooting. I don’t know how they kept it up, I was that knackered after shooting 3 songs I had to go for a lie down.

Getting this shot has now given me a new claim to fame though; Joe from Patent Pending dedicated a song to me for saving his life.

I didn’t really save his life, I just caught him as he came back over the barrier from his little venture, that story isn’t quite as cool though so I’m gonna stick to the original. 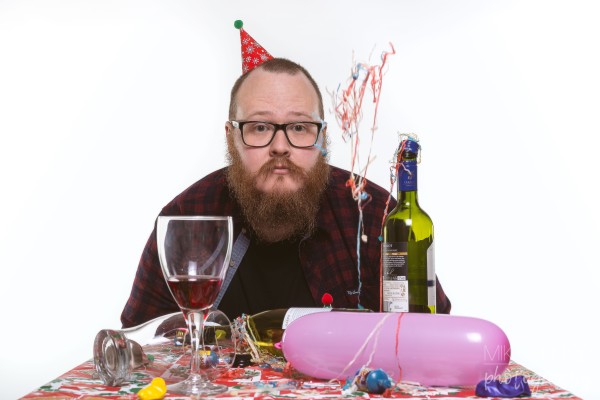 This last one is me.

I thought it’d be cool to set up a kind of ‘self employed/freelance christmas party’ for a bit of fun seen as all I was seeing on Facebook at the time was updates from everyone else’s regular works Christmas parties. First time I’d tried to dress a set properly like this and I’m really happy with how it turned out. Again, shot in my little studio space.

The shot is a result of me trying to look pretty and my Dad trying to throw the little paper streamers at the right time for about an hour because the party poppers I bought didn’t work.

Well that’s all of them and I hope you’ve had fun. If you’re not sick of me by now feel free to give me a follow on Twitter (for more nonsensical ramblings and the odd photo) or Instagram (more photos than ramblings on there) and you can give me a like on Facebook (photo to rambling ratio is more or less equal on there) if you’re so inclined via Mik Connor Photography. You can also give my website a peek for full portfolios and the odd blog, that’s mikconnorphotography.com.

Anyway, I’ll see you around somewhere. Thanks for reading.

All photos are taken and copyrighted by Mik. If you’d like to see more of his work or book him for a gig or portrait shoot, please contact him via his website or the social media links above.