Self-described ‘pop musician, producer, web developer and synthesizer nerd’ Tom John Hall clearly hasn’t let lockdown curb his creativity. On top of making and releasing his unique brand of infectious electro-pop, he’s been busy fundraising for projects in Derby with independent arts collective Year of Glad. It seemed only right to find out more, join us for a chat here…

Hey, how are you doing and what can you see from wherever you are right now?

Hiya! Very well thank you. I can currently see mostly synthesizers, guitar pedals and wires. My home office transforms into a home studio at the weekends. It’s a beautiful day so I have the balcony doors open too – not much of a view but it’s nice to see some sun!

It’s been the oddest year, aside from music what’s kept you going?

Animal Crossing, running and food. But mostly I have my partner, Edie, to thank for making this past year actually pretty okay all things considered. I don’t think I could have made it on my own, that’s for sure!

You released My Big Album last year (and 20 tracks truly do make a big album), tell us a bit about how that came together.

It was a relief to finally release it! I started working on it years ago, I’ve always been putting out music in various forms but never felt like I’d made a proper album. From early on I got attached to the idea of committing to this huge project, to capture every aspect of my perspective on the world and life at the time, and just working at it until it was perfect. It was a gigantic learning curve to try and produce what I had in mind with the limited means available to me, and I’m extremely proud of it – but I think the next one will be a slightly smaller album. 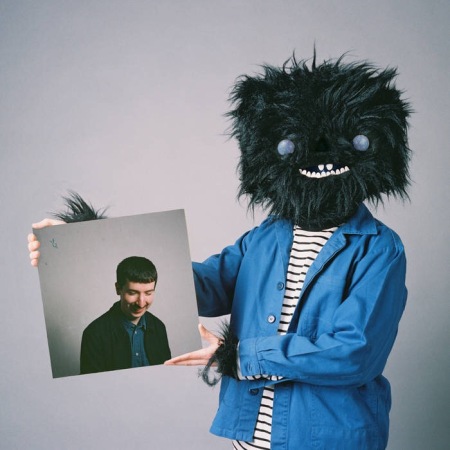 Your latest single 8mb has just come out – how have you adapted to releasing music in lockdown?

While it’s a shame not to be able to do one of our Year Of Glad release shows and get everyone together to celebrate, I am lucky in that I can go on producing and releasing everything from home without too much disruption. You definitely feel a bit more disconnected from the people who care about what you’ve put out, and it does feel more cynical relying on things like social media to be your main avenue for presenting your music to the world. The occasional live stream on Twitch has helped, and otherwise it’s just a case of trying to stay active and in touch with the people in our local scene to collaborate and listen to what one another are working on. I have friends in bands who thrive on getting together and performing live, they’ve been waiting for so long to go back to doing what they love so I count myself lucky.

The proceeds from the single are going to Derby and Burton Hospitals Charity, a cause close to your heart?

Yeah, absolutely – I’m sure most of us have people in our lives who’ve needed care from local hospitals this year under uniquely challenging circumstances, and sadly a lot of frontline staff are facing financial uncertainty, so I wanted to be able to donate a little bit to the Hospitals Charity for my (Derby) and my grandma’s (Burton) hometowns. Over lockdown all of Year Of Glad’s releases have been fundraising for causes, and it’s a really nice way to release music and bring people together.

Can we shout out the other stuff you’ve been raising money for in the community too – how did you get involved and how can other people lend their support if they’re interested?

Absolutely! Our YOG20 compilation over the festive season was in support of the Padley Group, a homeless shelter and kitchen in the city, and Doorways Derby, who run food banks and a soup kitchen. We put on a raffle and art stall and put out a compilation and the support was amazing, we managed to raise over £1200 and loads of amazing local creatives, small businesses and musicians chipped in to offer prizes and help out – there’s still a few things left on the art stall at Year of Glad. MARIA-M (now YAY MARIA) also released a single in support of Derbyshire LGBT+, and we put out a Papayér single (the band I play guitar in) for Derbyshire Coronavirus Relief Fund.

Take us for a wander round Derby – which 3 places are not to be missed?

The first has to be Dubrek, a studio, rehearsal rooms and venue in town which is now the home of alternative live music for many in the city and is also where I spent a huge amount of my time growing up, in lengthy ‘band practices’ (just sitting around) with my best mates in Papayér. It’s flourished into far more than just a place for bands to make noise, it’s now more like a hub for an entire creative community.

Second is just over the road, Bar One – a great independent pub where I’ve also spent a disproportionate amount of time. It’s run by a lovely bunch of people and is just a really excellent pub, basically.

Third is Bustler – it appeared a few years ago, occupying disused space and filling it with an eclectic mix of independent street food vendors, and has gone from strength to strength since. A few of my nearest and dearest are involved and I’ve had a sneak peek of the new permanent space they’ve been kitting out, it’s looking amazing!

As things open up again, if you could play any venue with any other artists,  what would you go for?

I’ve just rebooked my tickets for Randy Newman in 2022 – it was cancelled this year. A part of me wants to say joining Randy at the London Palladium but deep down I know that isn’t true, I think I’m much happier in the audience for something like that. To be totally honest I’d go for another night at Dubrek with YAY MARIA, which happens to be the last show I played before lockdown, and will most likely be the first thing we put on post lockdown, so just picking up where we left off basically.

What’s next for you – does it feel like you can start to make plans for the rest of 2021 now?

With my own music I’m moving slowly with working on my next record, THUNDERCHILD, which is a sci-fi concept album. I’ll be putting out a few more singles and booking shows where I can, but I’m also putting a lot of my energy into collaborations with other Year Of Glad artists and working on other people’s music for a little while, which is exciting. But my main focus is being able to be with friends and family again, and anything else is a bonus!

And last up, have you changed the clock on your cooker or are you waiting till October to see it tell the right time again?

The clock on my cooker does not, and quite possibly never will, display the correct time – BST or otherwise.

You can catch up with Tom here; My Big Album is available to purchase now

Interview by Siobhan
Photo via One Beat PR