With the release of their latest single One of These Days, London based Car Boot Sale continue to add to their impressive catalogue of soulful indie-pop tracks. We caught up with them to chat about making music before, during and after isolation…

Introduce us to Car Boot Sale – who’s involved and does your name come from a love of haggling on a wet Saturday morning?

Jim and Ciaran here, we’re two housemates that have been working on music together for the past couple of years. Car Boot Sale started as a recording project but has become more of a band since we started playing live with our pals. (Shout out to Jamie, Tim and Bryn!)

Neither of us are really morning people, so the name came from the fact that our sound and influences were quite disparate and varied, just like the stuff that’s sold at a car boot sale. We also didn’t want it to sound too serious and thought Car Boot Sale was a pretty silly name for a band.

Your new single One of These Days is out now; you’ve described it as being ‘An ode to dreaming, about maintaining an optimistic view of the future that you can carry through difficult times’. That seems incredibly apt for right now – when did you write the song and what was the inspiration?

This song was written last summer, just after we’d spent the weekend at All Points East Festival. We’d been listening to Toro Y Moi on repeat around about that time and seeing him live was mind blowing, we both felt super inspired by his band and performance and came away wanting to write a song that reflected that. The line ‘One of these days I’ll be where you’re standing’ was sort of the inner voice that was in our heads during the set. 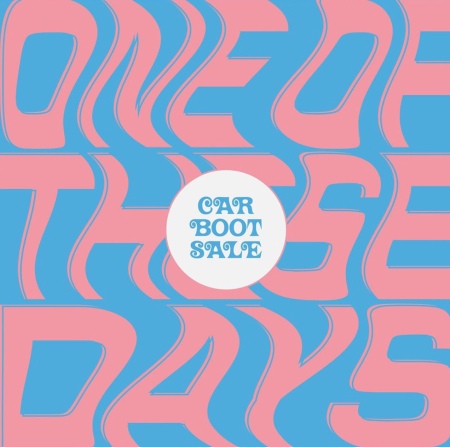 How are things with both of you – what’s helping you through isolation?

We’re all good, but currently quarantining separately, having to do the whole the online thing feels a little odd. Jim’s been tinkering away on some demos and has invested in some quite smart looking AstroTurf for the 2ft square balcony. Ciaran’s learning bass and bought one off Gumtree. When he went to collect it he had to post the cash through the letterbox and step away, luckily the guy was legitimate and left the bass outside for Ciaran to disinfect afterwards haha!

There are obviously no gigs or festivals happening now or any time soon. If you could play with any other artists who would you love to share a line-up with?

Jim – Lionel Ritchie would be amazing. We’re huge Tame Impala fans, or perhaps someone like Whitney or Tops or Parcels. There’s too many great bands to choose from!

You have Theo Verney mixing and mastering for you – are you fans of each other’s music, what influence does he have on your work?

We’ve been big fans of Theo’s songs and mixes for a while actually! Ciaran followed him on Instagram a couple years back and really hoped we’d get a chance to work together, so as fate would have it, Theo got in touch and offered to mix a track as a test.

When it came back we were both pretty blown away as we’d been doing all the mixing ourselves up until that point. It felt like we were hearing ourselves properly for the first time which was really cool. He’s also got a sick new band called Public Body.

An abridged version of Desert Island Discs – you’re allowed 3 albums, 1 book and a luxury item of your choice, what will you take?

We like our classic songwriters, so we thought we’d take some albums that have already stood the test of time:
David Bowie – Hunky Dory
Gerry Raffety – City to City
Neil Young – After the Gold Rush

We’re not really huge readers so perhaps it’s best if we take some sort of survival guide, otherwise I think we’d be in trouble.

Jim – Our old housemate left us with a huge painting of a sunburnt David Beckham. I think I’d bring that just to wind Ciaran up – he hates it! (I also reckon we could fashion a shelter out of it).

What are your plans when lockdown is lifted in terms of releasing more music and live dates?

We’ve got a bunch of songs demoed and we were planning to go into the studio with Theo around May, obviously that’s been pushed back so hopefully we’ll still get them recorded this summer. I can imagine we’re going to be really rusty after a couple of months not gigging, so as soon as lockdown is over we’ll be back in the practise room!

And what are you most looking forward to when we’re all allowed out again?

Playing gigs, watching gigs, beers in the park with mates, all the simple joys of life really!