A report published this week suggests that over 50% of retail sales will be online in the next 10 years. But with a rise in popularity, can the humble record shop buck the trend? Ryan Bell takes us on a visit to his local – Wah Wah Records…

In this age of crumbling high street giants amidst the luxury of instant online purchasing, it can be sometimes difficult to imagine how independent retailers can navigate through it and remain successful.

However, I have found that there is still the desire to find authenticity in retail therapy, whether it’s through the independent clothes designers found on Instagram or Etsy, the tea made with love in a local greasy spoon café or the bellowing banter of a traditional barber-shop, I feel there is clearly a place for a friendly face or an impassioned presence in 2019, and I find it most notably in my local ‘Bricks and Mortar’ indie record shop; Wah Wah Records in Wakefield, West Yorkshire.

Opened by Alan Nutton in 2014, it has become one of Wakefield’s few musical must visits, what with the vinyl record boom still booming away nicely. Stocking a wide variety of new and used records of all genres with a passion for the music and for the format, Wah Wah don’t deal online, they have social media for news and updates, taking pre-orders and nattering with customers, but to pick up a record through them, you’ll need to call in, something of a novelty in this aforementioned age of Amazon next day delivery.

The shop layout is delightfully simple; new stuff at the front, used gems in the back (in Yorkshire we don’t like to faff about) and I will argue anyone that disagrees with Wah Wah’s presentation being the best way to display records. Popping in to the shop you will find that Alan and his self-described “record shop lackey” accomplice Will are both more than happy to go back and forth on any musical topic, an approachability and personable nature which has led to the shop’s durability in these uncertain times, leading it to land a runner up spot in Long Live Vinyl magazine’s Record Shop of The Year 2018.

It’s testament to them that they have had the opportunity to hold some great instore performances from Manchester guitar band Man Made, to alternative hip-hop group Ceiling Demons, to even an appearance from British folk-punk hero Billy Bragg in 2018 to coincide with his performance at Wakefield’s rising music festival Long Division.

I was honoured to be asked to contribute to the shop’s five year anniversary fanzine earlier this year and five years is a milestone for an indie retailer in Wakefield, a small northern cathedral city where the locals might remark that the town has seen better days from when the market was in full swing and the pubs were full, but the city’s early risers are bemused annually by the sight of a snaking queue forming out of Wah Wah Records’ door on Record Store Day.

It would be naïve of me to ignore the primary relationship between a business and its patrons, however I feel places like Wah Wah Records are glowing examples of the potential of independent businesses. Once a commonality is found, it can result in hours of debate and discussion (as well as  the occasional disagreement!), the forming of friendships and, whilst not wishing to wander into the gushing or hyperbolic, a sense of community. 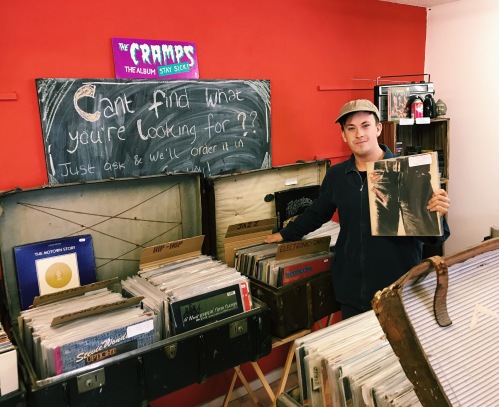 Vinyl might still be in vogue, and I’d be lying if I said it wasn’t the recent black-wax renaissance that spurred me into walking into Wah Wah a few years ago to gaze upon the glorious rows of 12x12s and begin my own collection/obsession. With this in mind, whilst Tesco and Asda might now stock vinyl, I doubt the cashier is going to be willing to listen to me babble on about Kanye West or Kate Bush for forty five minutes like Alan does, and for that, shops such as Wah Wah Records should be celebrated.