Night Flowers have been busy recording their new album, preparing for tour and pushing cars up hills – the new songs are sounding great so we caught up with Greg from the band to find out more…

Your new album Fortune Teller is out on Friday, how long has it taken to write and record and how did you decide which tracks to include?

We started writing Fortune Teller almost as soon as our last album Wild Notion came out, with some songs already well on their way before that. We hung out in Sheffield, where our drummer lives, and ended up tracking it in a few days at a great DIY space called Tye Die Studios. Some songs came together quickly during that time, and one song was actually added really late in the day, and is the original iPhone recording of the first take we did. Originally we were gonna use the recordings for demos but we thought ‘fuck it’ – they had a good feel about them and we wanted to capture that energy this time round.

There’s a track called Lotta Love which has a real vibe to it. It’s rare but, if I listen to it, I can dissociate from it and listen to it in a way that’s usually impossible to do when you’ve worked hard on something, and I fucking dig it. We played a real early desk mix to our drummer’s landlord the day we recorded it and he lost his shit, saying it reminded him of a time he and a friend drove through the desert together. Praise indeed.

The video for title track Fortune Teller is shot in 360 surround – it’s pretty disorientating but quite hypnotic to watch, how did it come about and who was involved in the making?

We actually made it ourselves. I borrowed a 360 camera from my work (I was working in a media uni at the time), we hired a beat up old VW Beetle, we stuck it to the roof, dressed up and hit record. The car fully broke down so we had to push it up a hill, and was also set up so low it was literally scraping the ground with the five of us in, making a horrible noise. We didn’t get many takes so we had to make each one count, but people seem to have gotten a kick out of it! The magic of cinema.. 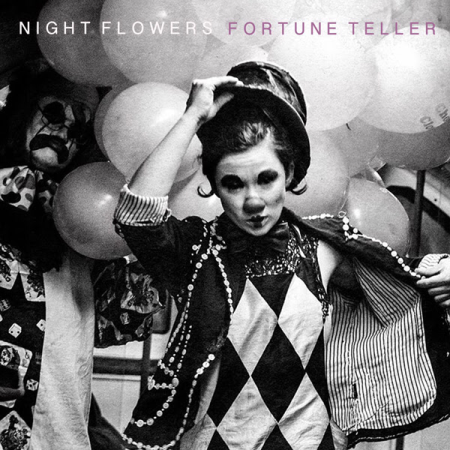 There are elements of the album that sound like it would make a great film/TV soundtrack – so which films or TV shows would you like to hear your music played on?

That’s a cool thought. If anyone’s reading this then please approach us, we really need some of that sweet film and TV money. I suppose it’s kind of a mood album, set out on the roads and mostly at night, so anything with that spin would work I think – the obvious ones, Lynch, Fincher, maybe True Detective, etc.. though we’re not kidding ourselves – we’re well aware we have a poppy, ditzy, romantic side that wouldn’t be out of place at the end of an 80s’ teen movie as the credits roll.

In the age of streaming and shuffle-based listening why is it still important to make albums?

I mean, maybe it’s not? It’s entirely possible to take an amazing journey with playlists and stuff, just like we used to with mixtapes. For me, there’s value in both, but I still enjoy giving myself over to a self contained world and vision, with all the hills and valleys an album’s landscape offers and allowing myself to be taken on that journey. If you value an artist, it’s nice to set aside time to soak in their world and see where they’re taking you.

You’re out on the road with LIFE in November, what can we expect at your live shows and if you could add any other band or artist to the bill who would it be?

We sure are – they’re old friends and we love them to bits. We’re pretty different bands but I think any open minded listeners in the crowds should get a kick from both. From us you can expect topless crowdsurfing, Busted style jumps and poetic post-punk riotous anger. Oh wait, hold on…

There are a million dream bands I’d love to play with but I’m trying to think of a band that bridges the gap between us and them nicely… shall we say The Wedding Present?

And what are you up to for the rest of the year and heading into 2020?

I’ve been to the year 2020. Not much has changed but they live under water – and your great, great, great grand-daughter is pretty fine!

You can find more from Night Flowers here; live dates and video for latest single Night Train below

Delighted to see the launch of No Such Thing Records, a new label set up by @dirtyfreud & @ruby_tingle addressing the lack of diversity in the industry - find out more on the website now (link in bio) & show them some love at @nosuchthingrecords .
Our March cover is up now! Come & join us for music, photography and more... link in bio.
Not posted a playlist update for a while but never fear, some great tracks have been finding their way on there from...
Ahead of the release of her fine album ‘maybe i will see you at the end of the world’ Jennifer Mullins caught up with Sydney Sprague to chat about the songs, the videos and the prospect of playing live again. Interview live on the website now, link in bio.
A very welcome return from Newcastle’s finest, Maxïmo Park are back with their new album Nature Always Wins, released on Friday - review on the website now, link in bio.
A trio of treats for your ears this week with new releases from Madu, Rosie Alena & Morgan Simpson and Bernice - reviews and track links on the website now - link in bio.
Out on Friday, The Hold Steady’s latest album, Open Door Policy, serves up a myriad of musicianship and tales to be told, review live now - link in bio.
Our animals gallery is online now.
Our animals gallery is online now.