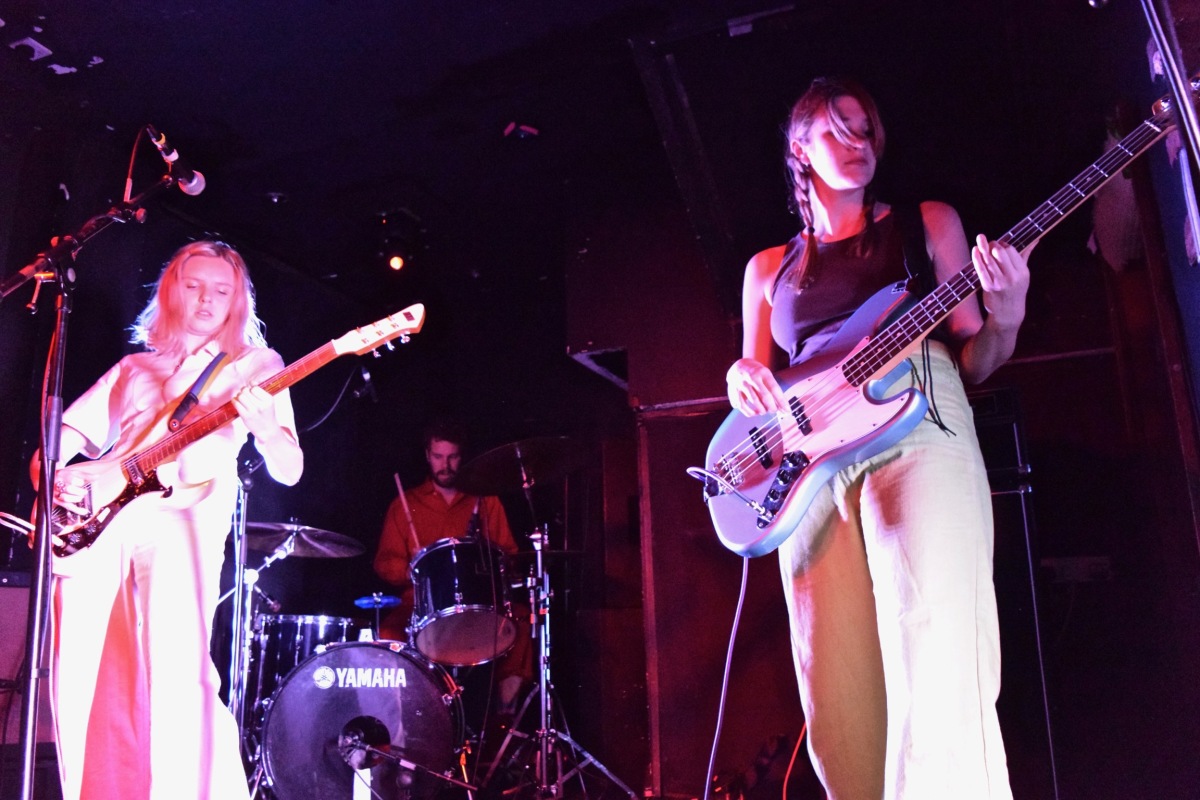 Ahead of their show in Glasgow, Alan caught up with Mermaidens for a chat about their new album, influences and life on the road…

Your new album, Look Me In The Eye came out a few weeks ago on 6th September, how does it feel now that the album has been released and what’s the feedback and reception been like so far?

Gussie: It feels good! We’ve been so busy that it feels a little surreal.

The album artwork is really impressive, engaging and eye-catching.  What kind of ideas did you have in terms of creating that?

Lily: I made the image for the album artwork. I really wanted it to be this kind of genderless human, that was kind of half formed and you might look at it at different times and see different faces.  It was shot on film with multiple images of our friends’ faces overlaid.

How did James Goldsmith (audio engineer/producer) utilise your sound in the studio? Did he bring out more of your sounds and experimentation?

Abe: Yeah, he’s a really helpful collaborator of ours. We’ve worked with him for around 5 years. It’s been really good to build our relationship with him. He understands what we’re trying to do.
Gussie: This is our third album with him and we made an active decision that he would be producing it.
Lily: We wanted to challenge ourselves as a group, so we wanted to push ourselves and we also wanted him to push himself. We all agreed that would be the direction.
Gussie: It was lucky that we were able to have a lot more time and we could afford to be more experimental. I noticed you released a special guitar pedal called the ‘Moon Cycle’. Can you tell us a bit more about the creation of the pedal?

Lily: We were recording and throwing some ideas around about some fun things we could do, as we wanted to do something special for the release of the album, so we thought we’d build a guitar pedal. In the recording of the album we were playing heaps of modulation pedals, especially with the guitar tone, so we were like, let’s make a pedal that does that.
Gussie: When we were talking about this idea, I did a quick Google looking for female pedal makers, just out of curiosity, and there’s not very many. That was an interest of ours to work with our friend who makes amps and pedals and is sort of just starting out and we wanted to give her a bit of a platform

(Further details regarding the ‘Moon Cycle’ pedal can be found here)

You’ve been touring Europe for most of the past month and you also visited earlier this year.  Are there any places or venues you’ve really enjoyed visiting on the tour so far?

Abe: Glasgow has been really cool.  We’ve also noticed there’s really good vegan food here!
Gussie: People are really friendly here as well.
Abe: We’ve also really enjoyed being in Europe as well. It feels like we get pampered here, which is quite enjoyable.
Gussie: They really like to show you their local food and local alcohol and they really want to make it a more memorable time, which is special. 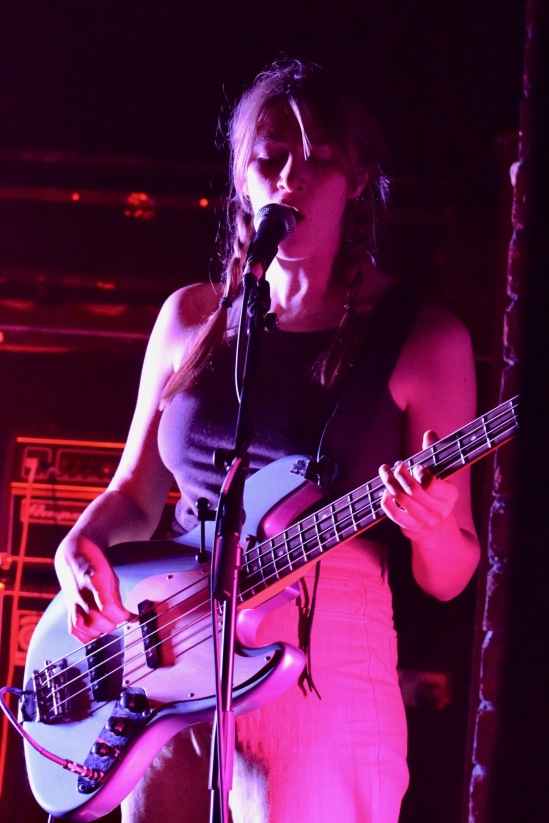 When you were starting a band, did you have any particular influences?

Gussie: Lots. We have some crossovers but we have some different music tastes though, which makes for a really unique sound. I think our influences show through in our individual playing style. We definitely had a few particular artists and songs that we used as like a recording inspiration.
Lily: I guess our crossovers, especially between us, are like PJ Harvey, these like strong song writing characters, who maybe stylistically we don’t emulate, but their power really inspires us.
Abe: We like Warpaint a lot, but I think back to the point of us having different music tastes, I think when people ask us what’s our influences, I don’t think we intend to make any type of music, obviously everyone is absorbing music all the time and you’re regurgitating it in some way, we’re not trying to sound like anyone, we’re just making each react to each other.
Gussie: We got introduced to The Slits during this album. That was a really inspiring guitar and listening experience for me.

Have you got any plans for the rest of this year and on to next year?

Gussie: Yep, after the tour we’re going back to New Zealand and we’ll do a small tour to release the album. Then we’re chilling out for a bit – Christmas and stuff.
Lily: Summer holidays, we deserve a little rest and then it’s on to the festival season.
Abe: We’re playing a festival called Laneway.

Would you be quite keen to come back to the UK for festivals?

Definitely. There’s some amazing festivals over here. That’s the hope for next year…

When entering the venue, you can easily see why it’s spoken of fondly – there’s a welcoming atmosphere and the upstairs area includes a highly rated, award winning kitchen and bar, which has an exclusively vegan menu and plenty of tasty options to feast on. Heading down into the basement where the music venue is located, you’re immediately greeted with lots of posters adorning the walls of upcoming gigs around the Glasgow area, showing the vibrancy of a diverse music scene in the city.

The music begins with a recently formed band called Bug, who set the tone for a great night ahead with their songs about Goblins and other songs so fresh that the titles are still to be decided.

Next up are Velveteen Riot, who blend soft vocals with a crescendo of guitars and drums.  Highlights include a recently released single called Peaches and their fierce set closer Model Girl. They even manage to squeeze in a superb cover of Be My Baby, originally released by The Ronettes. 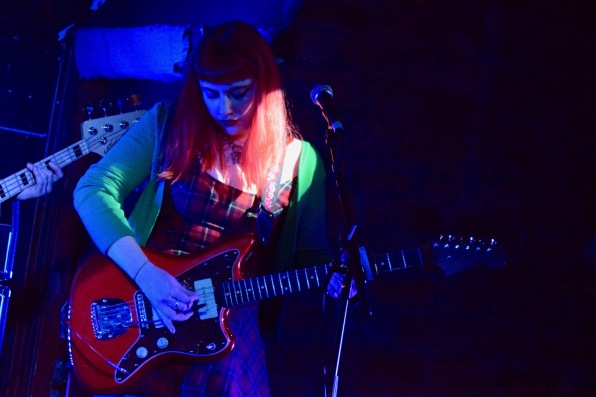 Mermaidens close the night with a setlist containing songs from all three of their albums. The venue may be small and intimate, but the sound is near perfect and really showcases the in-depth power of Mermaidens’ music. With Gussie Larkin on guitar/vocals, Lily West on bass/vocals, complimented by Abe Hollingsworth on drums, the songs sound excellent in a live setting and tracks from their new album, Look Me In The Eye are particular standouts such as I Might Disappear, Bastards and Millennia. 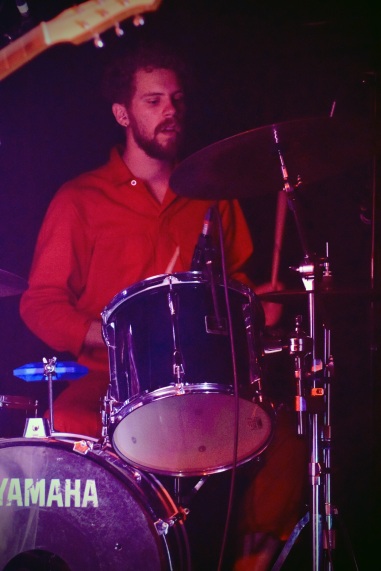 Concluding their tour with a selection of gigs around the UK and Europe for the remaining dates in September, Mermaidens will then head back to New Zealand to play Laneway Festival in Auckland on 27 January 2020. Judging from tonight’s stellar performance and their catalogue of songs released so far, it won’t be long until Mermaidens are a regular name included on major festival line-ups throughout the world.

For further details regarding Mermaidens’ music and their upcoming gigs, please visit their Bandcamp page. Their record label, Flying Nun Records, are also worth checking out for more great recommendations of music coming out from New Zealand.