The summer festivals may be safely tucked away but there’s no shortage of indoor events to look forward to, with the added bonus of not having to worry about getting sunstroke or washed away in the rain. Starting the winter season off in style, Dials Festival is back with another fine line-up, all hand picked from a huge pool of new and emerging talent to make up a really well thought out mix of artists and genres. Held at The Wedgewood Rooms and surrounding venues on Southsea’s Albert Road, this year’s headline slot is filled by The Blinders, bringing a phenomenal live reputation and plenty of searing post modern anthems, their set will undoubtedly be a highlight of the day.

Returning from hugely popular sets in 2018, it’s great to see LibraLibra and Fake Empire back on the bill. Both bands took early slots last year but pulled in the crowds and made big impressions – both well worth checking out.

The rest of the line-up looks equally appealing, some acts I know, some I don’t… yet. Having attended all the Dials events so far I can honestly say I’ve found new favourite bands every time and am looking forward to history repeating itself once again. Three of the best come highly recommended in the shape of menacing melodies from the mighty Madonnatron, pure disco-infused indie from Walt Disco and an intense hit of raw punk from Luxury Apartments. 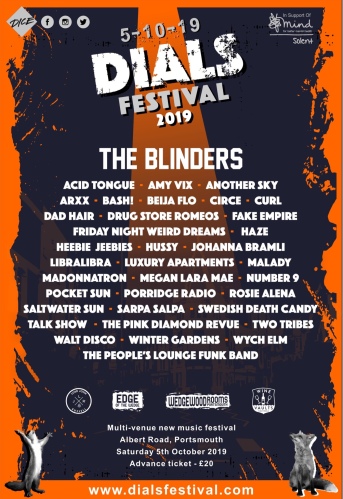 Aside from the artists, Dials is once again supporting and raising funds for Solent Mind, a much needed and utilised local charity. There is no doubting that music can give a massive release from mental health issues and the pairing of Dials and Mind is one that makes perfect sense. If you haven’t got a ticket yet there are limited numbers still available at the incredibly cheap price of just £20. There’s just a month to go so make plans, get along, support a great cause, come and say hello then find some favourite new bands of your own.